Tytte Bear is now out on Google Play! How much does it cost? Nothing! Download it for free and enjoy its winter wonderland this Midsummer’s Eve!

Just click this button to go directly to the store:

Tytte Bear will be released tomorrow! So let us take look in the rear view mirror.

Back in November 2014 I fooled around in the Unity game engine in order to prepare lectures. Though the focus was to create good lectures, those preparations also resulted in a prototype of what eventually would become Tytte Bear. At this point, development consisted of a few hours a week but by the end of January 2015 there existed a functioning prototype. The prototype consisted of a player avatar, a door, a switch, a simple enemy and graphics made with MS Paint or borrowed from the internet.

Proper development started in February 2015. This is when we started thinking about things like art style, story, level design, menus and introducing feed-back so the player actually knows what is happening. By the time March came around, the game had come to a stage were it began to resemble the final product.

A lot of work remained. The enemies had no animations, doors and switches consisted of red boxes and there was no sound! Also missing were the berries you collect, level select, save functionality and a lot more.  All of which have been added in the past months and have taken us to were we are today!

Maybe you are wondering what “Tytte Bear” actually means and why the game is called that? Well, it is tightly connected with the evolution the main character Tytte. In the beginning  there really was no name. The game was referred to as “Stealth 2D” or “Project Stealth”. The character was called Punchy since the placeholder graphic were a black blob that interacted with things by punching on them.

When more proper graphics were added I started thinking about an appropriate name for the character that could also serve as the game’s title. I found none. It was not until weeks later, when we added collectibles to the game in the form of lingonberries, that I had the idea to look up the word “lingonberry” in different languages. Mainly because the berry is red like Tytte’s coat. Turns out in Norwegian and Danish they are called “tyttebær”. Though the pun might be obvious to you now it was not for me. I just picked out “Tytte” since it is a rare girl’s name  in Sweden. I then tried out different subtitles. Most related to lemmings and other small rodents because that was the inspiration for Tytte’s design. But none of the subtitles sounded any good.

One day I was listening to the theme song from Disney’s Adventures of the Gummi Bears. Yes, it happens sometimes. In that moment it struck me that “bear” and “bær” is written and pronounced pretty much the same. The difference being the English word referring to an animal and the Norse  word to tiny fruits. Also, our small “rodent” kind of looked like a tiny bear. For this reason the name and title became “Tytte Bear”, a pun on “Lingonberry” and “Lingon Bear”.

The development of the main character was pretty straightforward since we early on knew what kind of animal it should be. This was not the case with the enemies that patrol the levels. In early prototypes the enemies were represented with a happy smiley-face.

Obviously a smiley isn’t very threatening so the placeholder had to go. The initial idea was to use John Bauer-like trolls. The concept process went from horrifying zombie trolls, to some less zombiefied trolls and finally scrapping the trolls in favor for wolverines. At one point we also played with the idea of the enemies carrying objects like lanterns. The lanterns were scrapped but you can see some lantern (and stick) sketches in the concept art below.

From day one it was the decided that Tytte Bear would feature a subarctic theme. Therefore the characters should be based on the wildlife in those regions. For the player’s avatar we needed a small creature to fit within the non-combat based gameplay. The artist were given the highly detailed instruction “Give me a Norwegian lemming or something” and she started drawing. Below are some of the concept art she delivered.

We finally ended up with this design: 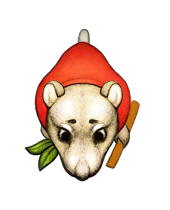 This is the story about the ambition with Tytte Bear, why Tytte carries a stick and how it all ties to Solid Snake.

I’m a big fan of Metal Gear Solid. No, not the one for PlayStation. Though it’s pretty good too. I’m talking about Metal Gear Solid for the Game Boy Color, also known as Metal Gear: Ghost Babel in some parts of the world. Being on the GBC the graphics were quite limited. The protagonist, Solid Snake, looked like a gray, pixelated rice corn.  On the other hand, lacking graphical horsepower it made the game focus more on actual gameplay rather than endless cut scenes and that is a good thing in my opinion.

Now, what does a coarse super-spy have to do with a cuddly, berry collecting, furr ball? Well, I wanted Tytte Bear to have the same general concept as Metal Gear: A two-dimensional stealth game with a bird’s eye-view. Though I also wanted the game to be suitable for children, thus Solid Snake’s habit to punch (or shoot) every problem in the face wasn’t going to cut it. This stealth game was going to be non-violent.

Thinking up a non-violent stealth game isn’t easy. Violence is a common element in the genre. Throw it out and you need to replace it with something else. Preferably something that enhances the “stealth”. Our first decision was to make the protagonist, Tytte, a small animal and the enemies predators. Which provides a reasonable explanation to why you can’t fight them. Though, we still wanted Tytte to interact with the enemies in in some way. Therefor we equipped her with a magic wand that could temporarily freeze enemies. This resulted in two problems. First of, it was too effective! You could freeze enemies over and over and they couldn’t do anything. Secondly, it was kind of boring with this block of  frozen beast blocking the way. Then we remembered the old prank were you tap someones shoulder and as they turn around you walk past them on the opposite side. We tried this by turning the wand into a regular stick. Which was easy since it kind of was a stick anyway. By poking an enemy with the stick, the beast will turn towards you, giving you an opportunity to sneak past. But it also introduces a risk factor since you might be spotted if you’re to slow. The screenshots below shows it in action.

The stick also opened up some other possibilities but we’ll take that another day. 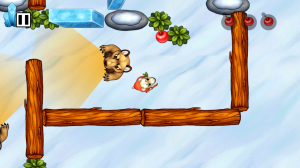