The development of the main character was pretty straightforward since we early on knew what kind of animal it should be. This was not the case with the enemies that patrol the levels. In early prototypes the enemies were represented with a happy smiley-face.

Obviously a smiley isn’t very threatening so the placeholder had to go. The initial idea was to use John Bauer-like trolls. The concept process went from horrifying zombie trolls, to some less zombiefied trolls and finally scrapping the trolls in favor for wolverines. At one point we also played with the idea of the enemies carrying objects like lanterns. The lanterns were scrapped but you can see some lantern (and stick) sketches in the concept art below. 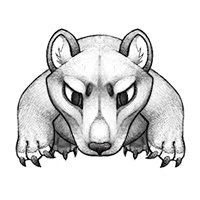